Reimagining the City through Creativity-A Case Study of Shenzhen 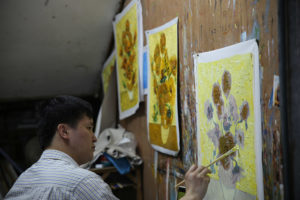 Abstract:
This project primarily concerns about creativity in relation to a city through the case study of Shenzhen, a city that aspires to rise from “a copy capital in China” to a global city of creativity. By scrutinizing how creative clusters serve as a nexus for reimagining Shenzhen’s past, present and future in the making of a creative city, this project looks into the interplay between the conceptual maneuvers of creativity and the social imaginary of a city.

This project situates the meaning-making process of creativity in the context of two creative clusters in Shenzhen – Dafen Village and Chaihuo Makerspace – whose global importances and visibilities have led to their landmark statuses in Shenzhen’s creative turn. By putting the two creative clusters in dialogue with each other, this project aims to probe into the complexity and contingency of the meaning-making of creativity, and to analyze the impact of creativity as an urban value mechanism on urban imaginaries and citizen-subjects.