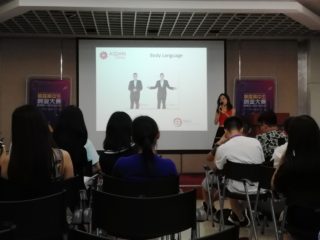 When I first started my field study in July 2017, I accidentally discovered an online report about The First National High School Innovation Competition which was to be held in Shenzhen from Thursday 13 July to Monday 17 July 2017 [1]. According to the report, after the initial training program, participants were supposed to come up innovative designs, pitch their ideas and form startup teams to achieve project breakthroughs from 0 to 1 within 52 hours.

Deeply intrigued by the novel format of the competition, I contacted the organizer of the competition and was granted permission to conduct my on-site observation there. The competition took place in a makerspace at an industrial park. There were altogether 51 participants coming from different parts of China. To my surprise, none of them seemed to be robot-obsessed bookish geeks, but mostly stylish teenagers with branded outfits, trendy hairstyles, and the latest electronic products. Later on, I got to know that all of the participants were planning to go abroad for their higher education, and their participation in this competition was expected to enhance their future applications for universities in North America.

The competition started with a two-day training program where coaches from different fields shared their experiences in design thinking, public speaking, PowerPoint making, and entrepreneurship. Picture 1. Training on public speaking. Courtesy of the author.

After the training, twenty-six participants came up with their ideas for innovation and each of them were given one minute to present their ideas in front of others. The most popular ideas reflected the general concerns of this group—the preparation for SAT examination and the consumption of overseas branded goods [2]. After a round of voting, twenty-six plans were narrowed down to nine, based on which nine teams were formed by inviting other participants to join. I joined ‘Gouyou Quan’ [狗友圈]，a group working on a social app for pet lovers, and worked with them from the third day. Supported by an international group of coaches and experts from different industries, we worked together to turn our ideas into a working business concept, performing market research and preparing the product demo. Picture 2. Participants voting for their favorite ideas. Courtesy of the author.

On Saturday evening, different teams ended up with a final pitch for a panel of educators, expert entrepreneurs, and venture capitalists. Four of the nine teams ended up in the top three, as the third place was shared by teams ‘Ji Jiu Bao’ [急救包] and ‘L-PRO.’ The former came up with an app that provided first-aid tips and services to its users, while the latter made a prototype of a pillow that could be converted into a desk on a bed. The second place went to ‘Potato’ team, which wanted to promote the sales of potatoes by establishing a potato-themed restaurant where customers can create their own potato sauces. The first place went to ‘Haitao’ [海淘] team, which designed an app to connect purchasing agents of overseas goods directly with customers through a Uber-like system. Picture 3. Team L-PRO pitching their idea in front of a panel of judges. Courtesy of the author.

The impact of the competition went far beyond doing credit to the participants’ future application for universities abroad. Teams ‘L-PRO’ and ‘Potato’ have registered as companies and attracted the interests of several investors, which, according to members of the two teams, was beyond their expectations. Other teams, such as ‘Ji Jiu Bao’ and ‘Haitao’ are also carrying forward their projects by seeking for potential partners and investors. While my teammates in ‘Gouyou Quan’ were disappointed by the fact that we did not win the competition, all of them acknowledged that they had harvested experience and friendship by taking this first step to their dreams of becoming entrepreneurs.